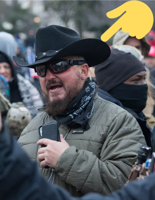 {"id": 48485, "type": "entities", "links": {"self": "https://littlesis.org/entities/48485-Stewart_Rhodes"}, "attributes": {"id": 48485, "name": "Stewart Rhodes", "blurb": "Lawyer, Founder of Oath Keepers | former volunteer to Ron Paul's failed presidential campaign", "types": ["Person", "Business Person"], "aliases": ["Stewart Rhodes", "Elmer Stewart Rhodes"], "summary": "Stewart is the founder and President of Oath Keepers. He was born in Fresno, CA and comes from a family of hard working migrant farm workers (of Mexican and Apache Indian decent) on his mother’s side, and hard working Midwest farmers, horsemen, and GM auto workers on his father’s side. Both sides of his family have a long tradition of military service. During WWII his Grandfather on his mother’s side was a B-17 ball turret belly gunner, and his Grandfather on his father’s side of the family served as an Army infantryman in the Battle of the Bulge. Nearly all of his uncles on both sides of the family served in the Army or Marine Corps during WWII, Korea, and Vietnam, and his father served as a Marine.\r\n\r\nFollowing the family tradition, Stewart joined the Army straight out of high school at age eighteen, attending Basic, AIT and Jump School at Ft. Benning, GA and then serving as a paratrooper (11B1P Airborne Infantry) stationed first at Ft. Bragg, NC and then at Ft. Lewis, WA, where he served in a long range Airborne scout company for the 9th Infantry Division until disabled in a rough terrain parachuting accident during a night jump. (jump #36!)\r\n\r\nAfter the Army, Stewart graduated Summa Cum Laude from the University of Nevada, Las Vegas, where his honor thesis focused on the political theory of James Madison. While attending UNLV, Stewart taught rape prevention and street crime survival as a volunteer instructor for the UNLV Jean Nidetch Women’s Center. He also worked as a professional sculptor and as a Nevada State certified concealed carry firearms instructor. After college he worked on Rep. Ron Paul’s (R, TX) DC staff.\r\n\r\nStewart graduated from Yale Law School in 2004, where his paper “Solving the Puzzle of Enemy Combatant Status” won Yale’s Judge William E. Miller Prize for best paper on the Bill of Rights. He assisted teaching U.S. military history at Yale’s History Department, was a Yale Research Scholar, and is now writing a book on the dangers of applying the laws of war to the American people (with partial support from a modest but gracious grant from Yale Law School). After law school he clerked for the Arizona Supreme Court and then served as a small town Montana criminal defense (including contract public defender) and general practice lawyer. He has served in a pro bono capacity on several gun rights cases before federal Courts of Appeal and the United States Supreme Court. While practicing law in Montana, he also served as a volunteer fire-fighter ( practicing what he preaches).\r\n\r\nStewart was invited to speak at Stanford University on unlawful enemy combatant status, and teaches classes on the Constitution and Bill of Rights. Stewart currently writes articles on the Bill of Rights for S.W.A.T. Magazine, and has written for The Warrior, the journal of Gerry Spence’s Trial Lawyer’s College; for www.moreliberty.org; and for Jews for the Preservation of Firearms Ownership (JPFO), and for his own Dirt Rhodes Scholar blog where he was an outspoken critic of Bush Administration violations of the Constitution (www.stewart-rhodes.blogspot.com).\r\n\r\nAfter founding Oath Keepers, Stewart has appeared on dozens of nationally syndicated radio shows, on scores of local radio shows across the country, and has appeared on MSNBC’s Hardball with Chris Matthews, on Fox News’ The Factor with Bill O’Reilly, and on CNN Special Reports.", "website": null, "end_date": null, "parent_id": null, "extensions": {"Person": {"party_id": null, "gender_id": 2, "name_last": "Rhodes", "name_nick": "Stewart", "net_worth": null, "birthplace": null, "name_first": "Elmer ", "name_maiden": null, "name_middle": "Stewart", "name_prefix": null, "name_suffix": null, "nationality": [], "is_independent": null}, "BusinessPerson": {"sec_cik": null}}, "start_date": null, "updated_at": "2021-11-23T21:09:23Z", "primary_ext": "Person"}}

Check LittleSis.org for additional documentation of items below.

All subjects are innocent before the law until proven guilty in court.

The iframe below may require you to log in a second time. Check the "auto login" box. View gallery directly (without frame)
View Twitter search results